History of the Site

The Nike surface-to-air Hercules missile was developed during the Cold War to destroy enemy bombers and enemy bomber formations. It could be fitted with either a nuclear W31 type warhead, or a conventional T-45 fragmenting warhead. The missile shown here is 41 feet 6 inches long with a wingspan of 6 feet 2 inches. By April 1974, when it became apparent that the greatest threat to the U.S. was from missiles instead of bombers, most Nike Hercules units were deactivated.

There were four Nike Missile sites surrounding the Twin Cities, including ours on the East side. Our facility was operational from 1962 to 1972 and stationed up to 200 men. 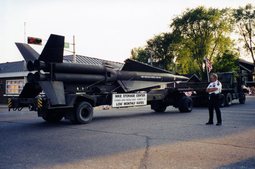